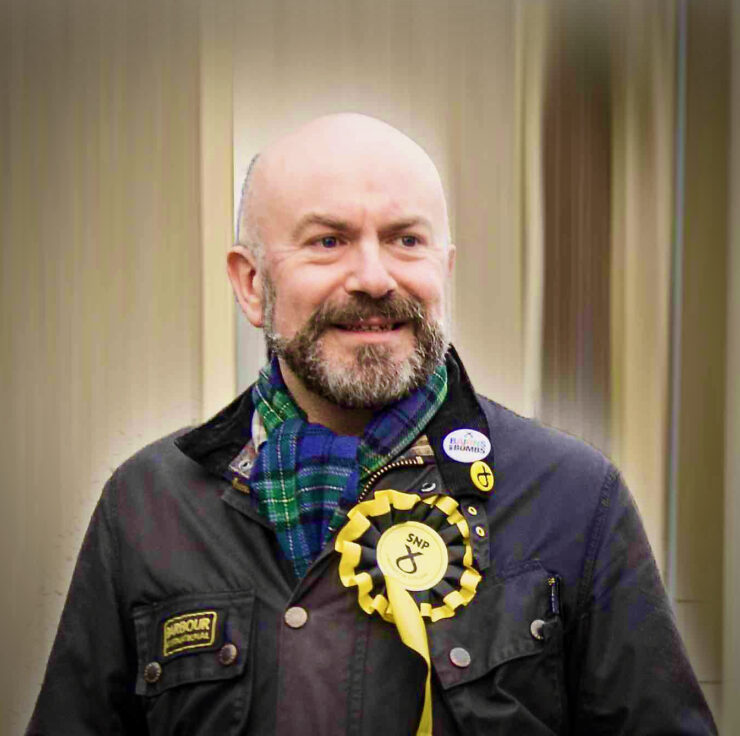 Members of the Orkney SNP branch have selected Robert Leslie as the party’s candidate for the 2021 Scottish Parliament election next May.

Robert Leslie has recently taken over as manager of local fuel poverty charity THAW Orkney. He also maintains a part-time role as energy officer with Orkney Housing Association Ltd, where he has worked since 2010.

A previous career in newspapers saw Robert work at The Orcadian, Orkney Today and the Press & Journal in Moray. He was born and brought up in Orkney and attended Kirkwall Grammar School. He later completed a BSc (Hons) in Environmental Studies through The Open University.

In his spare time, Robert Leslie is a side drummer with Kirkwall City Pipe Band and an enthusiast for live music. Unfortunately, these hobbies have been halted by the current Covid-19 pandemic. He is also the author of the history of Orkney Rugby Football Club. Robert Leslie and Kara, his wife, have three daughters, Ria, Isla and Ruby; two cats, Ginger and Poppy; and a recent addition to the family – Border Collie, Gaia.

Robert Leslie joined the Orkney SNP after learning much about political campaigning with Yes Orkney during the Scottish independence referendum from 2012 to 2014.  He then helped with co-ordination and communication during the General Election campaigns of 2015 and 2017, as well as the 2016 Holyrood election.

He has worked for Highlands and Islands SNP MSPs Mike Mackenzie and Maree Todd. Most recently he stood as SNP candidate for Orkney & Shetland in the 2019 General Election. He increased the SNP vote and reduced the majority of Alistair Carmichael.

Speaking after his selection as candidate, Robert said: “The Covid-19 pandemic has exposed the dysfunctional relationship between the Tory government at Westminster and the other countries in an increasingly disunited kingdom.

“The Tories at Westmenster have handled the crisis disastrously. The SNP Government in Edinburgh has done far better. The level of trust in Nicola Sturgeon as a leader compared to Boris Johnson underlines this” he said.

“Orkney suffers a major energy inequity due to the UK energy policy which isn’t fit for purpose. The high levels of fuel poverty in the islands is the most visible and damaging manifestation of that unfairness. Some folk in Orkney have to choose between heating and eating. And this in a county that generates more renewable electricity than it can use. This is just one reason why voters need to choose a different future next May and send an
SNP MSP to Holyrood.”

Robert Leslie wants to address other local issues. These include the need to identify sustainable and efficient replacement ferries for Orkney’s internal ferry service.

“I really feel that the SNP in Orkney can move the debate on from the ‘fairer ferry funding’ slogan. This has merely been used as a stick with which to beat the Scottish Government. Local folk are fed up with the old ferries. Orkney’s current leaders have a lack of vision when it comes to progressing plans for a new fleet.”

And, if Orkney really wants devolution of powers – as stated by Orkney Islands Council leader James Stockan recently – then, Robert says, there is a clear way forward for the islands.

“Instead of courting a Prime Minister who appears ready to break the law, Orkney’s leaders and voters should stand shoulder to shoulder with the SNP as we campaign to take decision-making closer to home – whether that be Edinburgh, Kirkwall, Stromness or Westray. The SNP, after all, has done more to recognise the different needs and issues of Orkney and Scotland’s other islands than any previous administration at Holyrood. The Islands Act of 2018, building on the great work of the award-winning Our Islands Our Future campaign, was a great step forward for Orkney and there is work to be done to ensure that the principles of ‘island proofing’ are fully adopted.

“The Act set a precedent for Orkney, Shetland and the Western Isles to work closer together in their common interests – and I would welcome more of this.”

Robert Leslie says issues being played out at Westminster show that Scotland needs to steer a different path.

“With a no-deal Brexit looming, and the UK Government admitting its willingness to break international law, we are seeing a power grab from the Scottish Parliament that puts the Scottish environment and economy at risk – with inevitable impact on Orkney’s agriculture and food and drink sectors.

“Electing an SNP MSP would be a signal from voters in Orkney that, as well as seeking more powers for themselves, they back the democratic right of the people of Scotland to have another referendum on independence. The leader of the Scottish branch of the UK LibDems, Willie Rennie, says they are not in favour of another independence referendum. He says his party will be arguing every step of the way to make sure that doesn’t happen. That doesn’t sound very democratic to me.

“It’s time to give Orkney a new voice at Holyrood as we strive to make these islands a fairer, greener and more resilient place in which to live and work as part of a stronger Scotland.”

The Treasurer, Organiser of SNP Orkney, and the webmaster for this site, Mike is a retired software engineer and company director. When not working towards an independent Scotland Mike enjoys photography, woodworking and cooking, but not all at the same time.